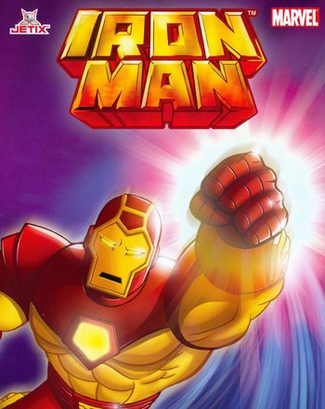 The '90s Animated Adaptation based on the Marvel Universe Superhero and his alter ego, Tony Stark. (An earlier Iron Man animated series was shown as part of the The Marvel Super Heroes lineup that ran in 1966.)
Advertisement:

This series ran for two seasons from 1994 to 1996 alongside Fantastic Four as part of the syndicated Marvel Action Hour. Like Fantastic Four, it had a bland first season and a significantly improved second.

The first season dealt with Iron Man and his team of fellow superheroes, Force Works — consisting of War Machine, Spider-Woman (Julia Carpenter), Hawkeye, Scarlet Witch, and Century — battling the forces of the evil Mandarin, such as Whirlwind and Grey Gargoyle. The episodes in this season were mostly one-part stories. Common points of contention for many during this season were the shoddy animation, general outdatedness and that other than the "Origin of Iron Man" two-parter, which modernized his origins, there were no attempts to adapt stories from the comic mythos.

The second season featured much better animation (due in part by switching to a different animation studio) and stories more similar to the comic. It was more Arc based, and the Superhero team aspect was downplayed with all the teammates besides Spider-Woman and War Machine resigning after Tony faked his death without letting them in on the plan. Mandarin was also downplayed, having small cameos in some episodes as he reclaims his powerful Ten Rings, which were scattered during a confrontation with Iron Man in the season premiere.

See also Comicbook.Iron Man and Film.Iron Man, other works with this title.