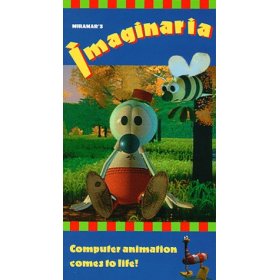 Imaginaria was a compilation of 13 CGI shorts released by Miramar Productions on VHS and LaserDisc in 1993, who produced the popular The Mind's Eye series. Most are multiple shorts edited together, but on the whole it's not as confusing as most examples of the method. It's notable for including The Adventures of André & Wally B., how well most of the shorts have aged and for its many memorable songs and instrumentals by Gary Powell.
Advertisement:

The full list of shorts, according to The Other Wiki:

Every Imaginaria segment was used alongside clips from the first two Mind's Eye videos on Canadian cable channel YTV's 1994-1996 "Short Circuitz" interstitials, primarily as filler back when the station was only required to run 8 minutes of commercials an hour. Independent superstation NTV (Newfoundland Television) adapted these videos into five "Computer Animated Art Festivals" in the 2000s alongside new post-production effects and pop music soundtracks, giving even more of a Mind Screw effect than before.