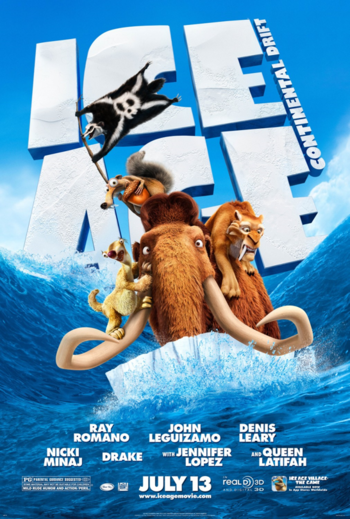 The end of the world is just the tip of the iceberg.
Ice Age: Continental Drift is the sequel to Ice Age: Dawn of the Dinosaurs, and the fourth film in the Ice Age franchise, released on July 13th, 2012.
Advertisement:

Taking place a few years after the events of Dawn of the Dinosaurs, Scrat's pursuit of the acorn has world-changing consequences. When Manny is separated from Ellie and their now-teenage daughter Peaches (Keke Palmer) on an iceberg with Sid, Diego, and Sid's loudmouth Granny (Wanda Sykes), he promises that he will find a way to return home. While crossing the ocean they are captured by the evil pirate ape Captain Gutt (Peter Dinklage) and his gang of pirates. However, they escape and Manny plots a plan to steal Gutt's ship and return to his family in a dangerous voyage through the sea. But the cruel pirates seek revenge against Manny and the gang determined to stop them from returning home.

This film is followed by Ice Age: Collision Course.

In theaters, this film was proceeded by a Simpsons cartoon short, The Longest Daycare.