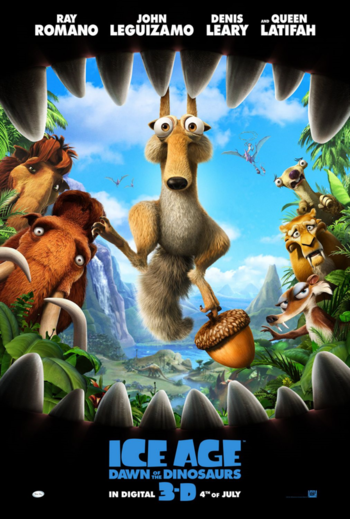 "We've been living above an entire world, and we didn't even know it!"
Ice Age 3: Dawn of the Dinosaurs is the sequel to Ice Age 2: The Meltdown, and the third film in the Ice Age franchise, released on July 1st, 2009.

The third movie, Ice Age: Dawn of the Dinosaurs was released in 2009 and involves a Lost World filled with DINOSAURS! It turns out there is an entire prehistoric world that somehow survived by being located underneath the surface of the Earth. Manny and Ellie are expecting their first child, and Manny becomes compulsively over-protective of her as he tries to be readily prepared for when the time comes. Sid is jealous and raises three abandoned eggs. They turn out to be baby T-rexes, and when their real mother finds out they were stolen, she takes her three babies and Sid underground, and Sid's friends all go to his rescue. There they meet a seasoned, slightly insane adventurer weasel named Buck, who becomes their guide in surviving this new world, and with an agenda of his own.

Reviews for the film were mostly mixed from critcs, but it was well-received by the general public and was a blockbuster success. The film grossed $196 million domestically and $886 million worldwide against its $90 million budget, making the highest-grossing film in the franchise.

This film is followed by Ice Age 4: Continental Drift.