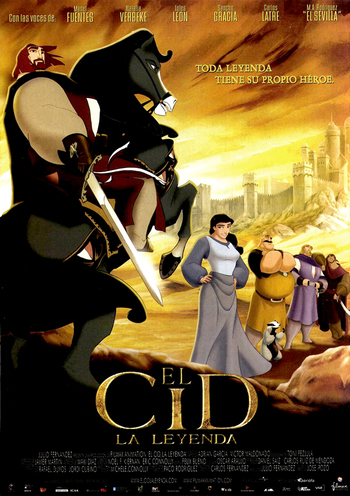 Every legend has its hero.
Advertisement:

El Cid: La Leyenda (El Cid: The Legend) is a 2003 Spanish animated movie written and directed by José Pozo and produced by Jade Animationnote with assistance from, among others, A. Film, Wang Film Productions, Hanho Heung-Up and Canuck Creations.

It is a lightened up version of the life of Don Rodrigo Diaz de Vivar (aka El Cid), or rather, of the 1961 movie with Charlton Heston, which itself is a very loose adaptation in its own right. Rodrigo is a brash and young knight from Castella with a promising future who becomes entangled in a conspiracy with his enemies that see him exiled from his home. However, a cruel conqueror who desires to subjugate both Christians and Moors, will crush anyone who stands in his path. In order to return to his home and to the arms of his beloved Jimena, Rodrigo needs to rally both factions to unite and stand together against this tyrant.