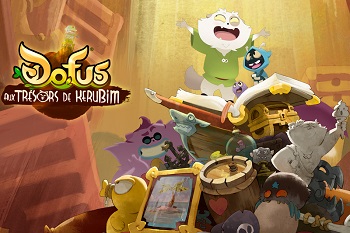 It's Story Time.
"Each of these items has a story. Each of them was an adventure. And that's what makes them treasures."

Dofus: The Treasures of Kerubim or Dofus: Kerubs Bazaar as its localized title, is an animated series set in the world of the Dofus MMORPG. Unlike its sister series, Wakfu, there is no great overarching adventure to be had, nor any powerful villain to thwart. In fact, the central premise of the series is that all of Kerubim's adventures are already over. Instead, most episodes are about the eponymous character regaling his adopted grandson with tales about his adventures when he was younger, usually based around a trophy of some sort that he gained from it.

Each episode is roughly 12 minutes long, and with few exceptions, all focus on Kerubim telling a story to his adopted son Joris, live-in maid Simone, random friends and acquaintances, or any combination of the above. These stories are told via flashback, and revolve around an item that Kerubim had collected during his days as a young adventurer.

In 2016 a sequel movie was released titled Dofus: Book 1- Julith, you can find tropes for it here.

On November 2nd, 2017 an English Dub premiered exclusively on VRV in the United States.

Dofus: The Treasures of Kerubim provides examples of the following tropes: