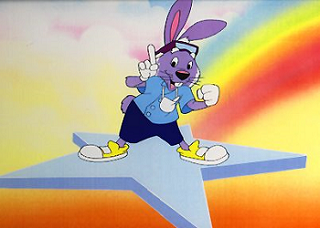 Dr. Rabbit (also known as Professor Lepus in order to avoid copyright infringement) is an anthropomorphic bunny dentist originally created by Colgate-Palmolive in 1994 to teach kids about dental hygiene (and shill Colgate toothpaste). He has starred in five videos: Dr. Rabbit in the Incredible Ride (1994), Dr. Rabbit's World Tour (1998), Dr. Rabbit Comes to School (2003), Dr. Rabbit and the Legend of Tooth Kingdom (2004), and How to Have a Bright Smile (2009).

In World Tour, Dr. Rabbit travels around the world to promote oral hygiene, and meets several kids along the way. In Tooth Kingdom, he and his new female assistant tell a story to a group of children about a kingdom under attack by the evil sorcerer Plaqula. In Comes to School, he — as a puppet joined by Alpha Betty and Doogan the dog — teach some schoolchildren how to brush and become Super... Duper... Brushing... CHAMPIONS!!!

Dr. Rabbit and the Legend of Tooth Kingdom contains examples of:

How to Have a Bright Smile contains examples of: