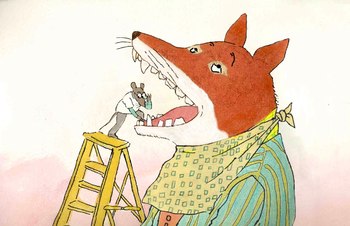 It is an adaptation of a children's book of the same name by William Steig. Doctor DeSoto is a mouse dentist. He tends to animals great and small, from other tiny mice like himself, to great big animals like horses; when he has to fix the teeth of a large animal his wife (also his dental assistant) winches him up with a pulley.

Doctor DeSoto has one firm rule: he doesn't treat dangerous animals. Carnivores, that is. So when a fox comes to the office pleading for help with a terrible toothache, the dentist is reluctant, but he gives in. Naturally, the fox decides to eat him, which forces Doctor DeSoto to figure out how to fix the fox's tooth without letting himself and his wife be lunch.