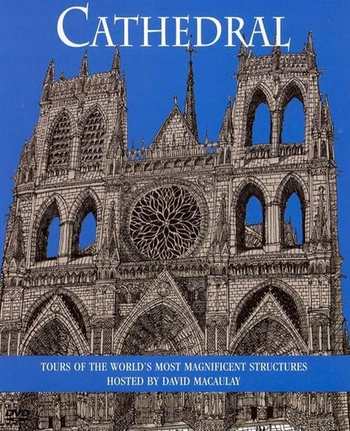 Cathedral is a 1986 PBS documentary with fully animated docudrama sequences, adapted from David Macaulay's first book on ancient engineering, Cathedral: The Story of Its Construction. It was produced by Unicorn Productions and presented by WGBH Boston.
Advertisement:

After a cataclysmic fire incinerates the old cathedral in the town of Beaulieu on May 1, 1214, a young boy named Pierre (voice of Derek Jacobi), presumed dead in the conflagration, emerges from the flames with the veil of the virgin, one of the holiest objects in Christendom, in his hands. Taking the miracle as a sign, the town's bishop, Philippe (voice of Geoffrey Matthews), appoints Pierre to chronicle the construction of a new cathedral, grander and more durable than the one that had come before. After Bishop Philippe and the town's chapter agree upon the initial source of funds for the construction project, a veteran master builder, Guillaume de Solis (voice of BRIAN BLESSED), is put in charge of the project. Amazed at the scale and hitherto impossibility of the project, Pierre is reassured by Master Guillaume that his techniques, and divine inspiration, will make it not only possible but a reality. The project, known by the name of Notre Dame de Beaulieu, has its ups and downs, and some of the staff is lost to time and other circumstances, but through it all, the project is seen through to its completion after over half a century. In the live-action wrap-around sequences, Macaulay and French actress Caroline Berg explore the real-life cathedrals that served as Macaulay's inspiration for the setting of his story. A standalone version featuring only the animated sequences was also made available.

Original production funding was provided by the National Endowment for the Humanities and the Arthur Vining Davis Foundations. Additional funding for the 1994 rebroadcast was provided by the Corporation for Public Broadcasting and public television viewers.

Useless trivia: on its premiere on April 30, this was shown as a double-header with the gospel documentary Say Amen, Somebody, and the 1994 rebroadcast was followed by a half-hour Mark Russell comedy special and the 13th Annual Championship Ballroom Dancing special.

Unrelated to the English Doom Metal band, or a 2019 Metroidvania of the same name. It is also unconnected to The Cathedral, a 2002 sci-fi animation from Poland.

Here be these blessed examples of various tropes: