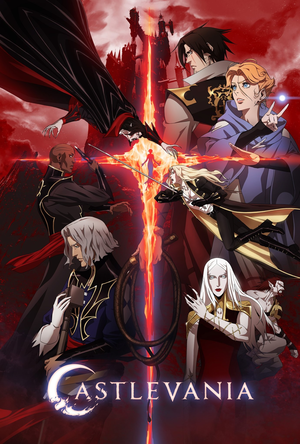 Castlevania is a 2017 Animesque adult animated series for Netflix produced by Frederator Studios and animated by Powerhouse Animation Studios (with assistance from Mua Film/Tiger Production and Hanho Heung-Up in Korea, and D'Art Shtajio in Japan). It's based on the Castlevania series of games, specifically the prequel Castlevania III: Dracula's Curse with elements of Castlevania: Symphony of the Night and Castlevania: Curse of Darkness thrown in.

on March 5, 2020. A fourth and final season premiered on May 13, 2021. A Sequel series / Animated Adaptation of Castlevania: Rondo of Blood starring Richter Belmont and Maria Renard set during the French Revolution titled Castlevania: Nocturne was announced on June 11, 2021.