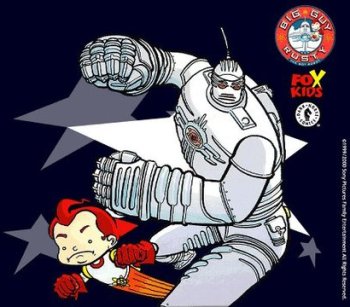 Comin' atcha!
What would you get if Optimus Prime was the hero and mentor of Astro Boy? We're not sure, but this series evokes that question. Big Guy and Rusty the Boy Robot (1999-2000) was an animated television series produced by Sony Pictures Television for Fox Kids, based on the comic book. The Big Guy was the old warhorse robot superhero who was to be replaced by an all-American Rusty; however, Rusty's inexperience forced the Big Guy back out of retirement to serve as Rusty's mentor and partner. Complicating matters was the fact that the Big Guy, Rusty's hero and role model... wasn't actually a robot. Unable to develop a working AI in time, the government secretly converted it into a Powered Armor, piloted by Lieutenant Dwayne Hunter, who poses as the Big Guy's mechanic to the outside world. The secret has to be kept from Rusty, as well, for fear of what the shock might do to his mind.

Alternative Title(s): The Big Guy And Rusty The Boy Robot