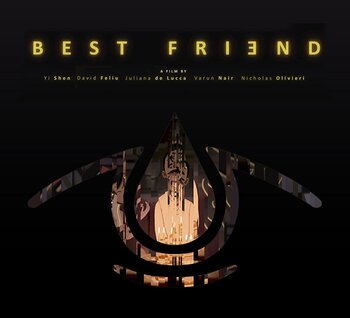 We are your friends 🎵
Are you still looking for a better friend?
Now, we can give you the best.
The friend only you can see.
Best Friend.
Never be alone.
Advertisement:

Set 20 Minutes into the Future, the story revolves around Arthur, a lonely man currently addicted to a product called "Best Friend" which offers him perfect virtual friends. When he runs out of fuel to sustain the illusion, he's forced to venture out of his tiny apartment for a refill. That's where things take an unexpected, and frightening turn.

The entire 6-minute short can be viewed here

on YouTube. A two-part behind-the-scenes making of the short can be watched here