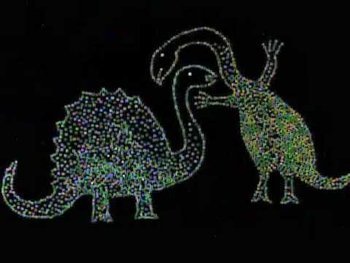 Bead Game is a 1977 animated short film (5 1/2 minutes) by Ishu Patel. It was produced by the National Film Board of Canada.

The film was made with stop-motion animation of beads against a solid black background. It is a symbolic portrait of conflict and war, forever, never ending. The film starts out with a single bead, which splits into two beads, which soon grow into representations of multicellular organisms. It soon becomes clear that the little organisms are eating each other, with one organism growing and becoming more complex after eating another one.

The little bead creatures grow, becoming bigger creatures, then fish, then bigger fish, always attacking and eating each other. The process of evolution over hundreds of millions of years play out as the bead creatures grow more complex, come onto land, evolve into vertebrates and then primates and then man. Man no longer eats his fellow man but man still fights, eternal combat first with rocks and stones and then with clubs and then with arrows, guns, tanks—and finally the nuclear bomb.

Now available on Youtube through the NFB's official channel