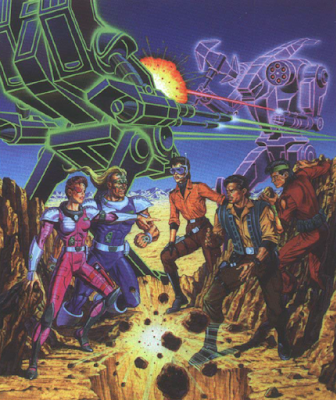 This is the Inner Sphere - thousands of planets colonised by humankind. Once it was united under the Star League, but for the last 300 years it had been consumed by savage wars until a new enemy appeared, mysterious invaders known as the Clans. Powerful and ruthless, they struck like lightning, attacking every sector at once. But they made one big mistake - they attacked my home planet! Now, in the spirit of the Star League, ancient enemies have reunited, and we're gonna take back our galaxy!

FASA partnered up with Saban in 1994 to produce an animated series based on the tabletop game BattleTech, which would introduce and tie into the then-relatively-recent Clan Invasion expansion.

In the fourth millennium, humanity has expanded into the stars, and the area around Earth, known as the Inner Sphere, is divided into six realms who have spent the last few centuries warring against each other with big giant robots. Without warning, they are simultaneously attacked in 3050 by a force from beyond the boundary of the Inner Sphere, Clan Jade Falcon under the command of Star Colonel Nicolai Malthus, who possessed faster, stronger, more resilient BattleMechs.

Upon hearing that the Clans have conquered his home planet of Somerset and taken his brother, Andrew, prisoner, Major Adam Steiner of the Federated Commonwealth requisitions a smuggling vessel and crew recently captured from the Draconis Combine and, with the approval of the the FedCom Archon and the Combine Coordinator, recruits a small, motley band known as the First Somerset Strikers to liberate Somerset and gather information on the Clans along the way.

BattleTech only lasted one season. It was one of the first American cartoons to have an ongoing storyline, with plot threads developed over multiple episodes that weren't explicitly labelled as multi-parters. It was also one of the first to combine cel animation with CGI, using the latter for 'Mech battles; this was explained as a representation of Enhanced Imaging, a Clan technology that made it into the tabletop game.

While a fair amount of artistic license was taken to keep things family-friendly, FASA did release a few sourcebooks which incorporated the characters and broad strokes of the story into the tabletop setting; Adam Steiner especially became prominent in subsequent stories.note  The book Operation Audacity in particular was written as a valentine to fans of the animated continuity. The series itself is regarded In-Universe as a dramatisation of canon events, made as anti-Clan propaganda.