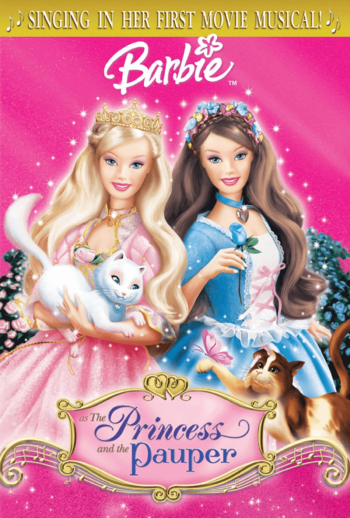 Barbie as the Princess and the Pauper is the fourth in the film series and is billed as the first-ever Barbie Musical. It was released in 2004, preceded by Barbie of Swan Lake and followed by Barbie Fairytopia.

It stars Barbie as both Anneliese and Erika, a princess and a pauper. After a chance meeting, the two become quick friends due to their similarities and how they look just like each other (except for their hair colors and Anneliese has a royal birthmark). However, with the kingdom's finances falling, Anneliese is engaged to Dominick, the king of a neighboring kingdom, despite her love for her tutor. When the queen's scheming advisor Preminger arranges for Anneliese to be kidnapped so the marriage to King Dominick will not go through, Anneliese's tutor Julian arranges for Erika to replace Anneliese until the real princess is found.

Barbie as the Princess and the Pauper provides examples of the following tropes:

"To Be a Princess" performed when Erika is living it up vs during her darkest hour.

Alternative Title(s): Barbie In The Princess And The Pauper

"To Be a Princess" performed when Erika is living it up vs during her darkest hour.