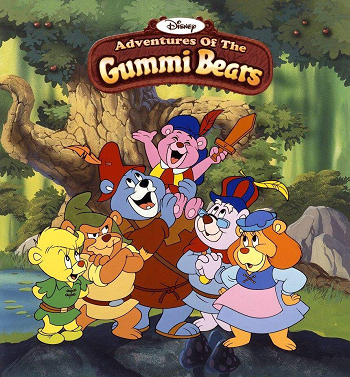 "Dashing and daring, courageous and caring,
Faithful and friendly with stories to share,
All through the forest they sing out in chorus,
Marching along as their song fills the air..."
Advertisement:

Disney's Adventures of the Gummi Bears is a show by Walt Disney Television Animation and TMS Entertainment, which produced the animation for the show's first four seasons; it was replaced by Walt Disney Animation Japan for the rest of the show's run. Although The Wuzzles was Disney's first original animated TV series, that was really a trial run for this series, which almost immediately made the company a dominant force in television animation. This series lasted from September 1985 to February 1991, with a total of 94 episodes; it initially aired on NBC before moving to ABC in 1989note Along with The New Adventures of Winnie the Pooh to comprise the Gummi Bears/Winnie the Pooh Hour and then to syndication as part of The Disney Afternoon.

The show was actually a major gamble for Disney, as it was a very new idea. Disney reasoned that the costs of a high-quality animated show could be recovered in syndication. Also, TV animation companies like Hanna-Barbera and Filmation had to operate within the network license fees for their productions to keep the studios alive, while Disney, a major media corporation with renewed strength, could directly finance their TV work on top of the network license fees for a future payoff. The gamble worked, and a new era of unprecedented quality in western television animation was born with Disney's competitors eventually being forced to raise their production standards and budgets to avoid unfavorable comparisons. In short, this series helped usher in The Renaissance Age of Animation.

The series takes place in The Theme Park Version of medieval times, centuries after the "Great Gummis" fled across the sea, while a small caretaker colony stayed behind in Gummi Glen, in the Kingdom of Dunwyn, to maintain the civilization's extremely sophisticated infrastructure, on the off-chance the Gummis could return to live with humans in peace.

Unfortunately, when the story begins, the Glen Gummis have declined to only six descendants, who have forgotten their past skills. Fortunately, they meet a friendly human boy named Cavin who found a Gummi Medallion that unlocks their library's Great Book of Gummi, the essential book of their culture's knowledge. Inspired, the colony decide to rediscover their heritage and help the boy, whose kingdom is under dire threat.

That threat comes in the form of Duke Igthorn of Drekmore and his army of really dumb ogres. He is out to conquer Dunwyn and upon discovering that the supposedly mythological Gummi Bears exist, he will stop at nothing to exploit their secrets, like their powerful magic and technology, for his own use. Furthermore, he is but the most frequent of a whole host of enemies that the Gummi Bears and their human allies must oppose.

If you're wondering how they came up with this show's premise, as the story goes, Michael Eisner was inspired when his son requested Gummi Bears

The show was incorporated into the backstory of the rebooted DuckTales (2017), which posits the Gummi Bears as a legendary ancient race who left behind the recipe for their juice which is now being fought over, though unfortunately the word "Gummi" can't actually be used in the show due to rights issues with the candy.

The show is streaming on its entirety on Disney+.