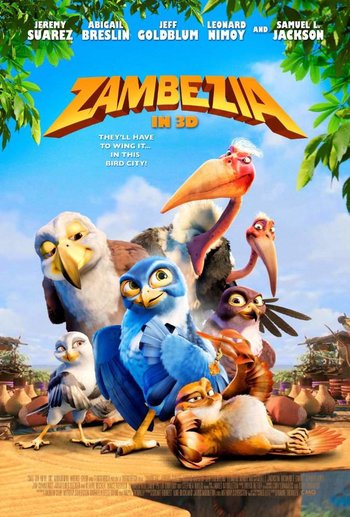 Adventures in Zambezia (Also known simply as Zambezia) is a 2012 English-language South African computer animated film focusing on a young Peregrine Falcon named Kai (Jeremy Suarez) who lives in a desert with his father, Tendai (Samuel L. Jackson) after the death of his mother.

After a visit from Gogo (Jenifer Lewis) and Tini (Tania Gunadi) who are attacked by a pair of Marabous, Kai decided to follow them to Zambezia, a bustling bird city near the edge of Victoria Falls. Meanwhile, Tendai comes across an evil plan by Budzo (Jim Cummings) to eat all the eggs in Zambezia, only to get captured in the process. Kai must now work with Zambezia's resident air force, the Hurricanes, to protect Zambezia from Budzo and the Marabous.