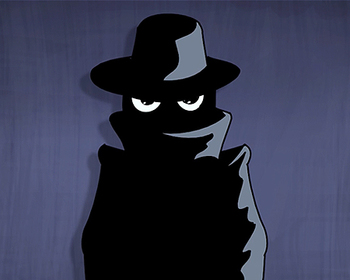 Keep moving forward.
"I review terrible episodes from various cartoons and horrible animated movies. Whether it be SpongeBob, Family Guy, a show that couldn't make it past its pilot, or awful Disney cheapquels. I also review some of the hidden gems that may have gotten lost in the mess providing some of the most tearjerking or heartwarming stories ever told."
— Mr. Enter describing himself on his Patreon

The Mysterious Mr. Enter (a.k.a. John Enter, real name Johnathan Rozanski) is a freelance writer and internet critic known primarily for producing videos where he reviews works of animation, both good and bad.

Originally, Mr. Enter was known for his...

Speaking of which, he currently has three series:

On top of his reviews, Mr. Enter occasionally makes opinion pieces and sub-series. These include:

He also had a Vimeo account until Fox terminated it in mid-2014. His Deviant Art can be found here,

and his Patreon where fans can fund reviews is here

. You can also check out his own personal website here

His other creative projects include: note Any opinions expressed here are those of Mr. Enter himself, and not the page's editor

He also has a second channel here

where he uploads miscellaneous material; the first 2 chapters of his vocal readings of Little Cassie are uploaded there. His body of work has a discussion thread on the TV Tropes Forum starting here.

Mr. Enter goes on a rampage on Buck Cluck from Chicken Little

Mr. Enter goes on a rampage on Buck Cluck from Chicken Little