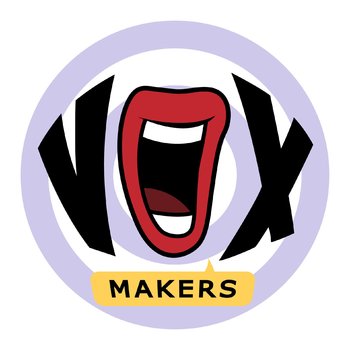 Your videos are our voice.
"VoxMakers is going to have a TV Tropes page. This is beautiful."
— Noru-Da

is a French website featuring the eponymous team of videomakers, in a similar fashion to That Guy with the Glasses, founded by Thomas Cyrix and the Ermite Moderne. Their videos include, among others, reviews, Let's Plays, Vlogs, comedy skits, musical compositions, and original creations, and cover topics related to pop culture, geek culture, and entertainment medias.

In 2014, VoxMakers opened four new channels named VoxGamers (dedicated to videogames), VoxMotion (dedicated to movies and series), VoxNakama (dedicated to Japanese culture) and VoxMusic (dedicated to music), of which the purpose was to welcome new videomakers. However, the four channel were soon merged into a single one, named VoxMakersPlus

, used for the trial period of new VoxMakers members.

In August 2015, the VoxMakers website launched a new section called VoxPlumes, dedicated to writing. Said section has since then grown to host dozens and dozens of short written stories and one-shot comics, with new ones being added every few days. All creations by VoxPlumes members are listed here

, and a dedicated (though incomplete) blog page

On October 30th of 2017, it was announced that the site would shut down, as the different team members wanted to pursue their respective career goals and/or focus on individual projects. Some members left their videos up on the VoxMakers YouTube channel, while others had them moved to their own personal channels.

For a list of VoxMakers contributors, see the characters subpage.

VoxMakers shows with their own pages: