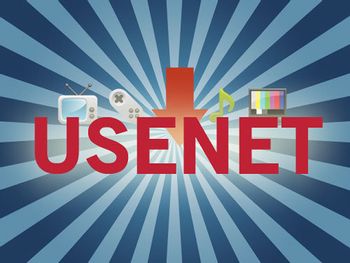 Usenet is like a herd of performing elephants with diarrhea — massive, difficult to redirect, awe-inspiring, entertaining, and a source of mind-boggling amounts of excrement when you least expect it.
— Gene Spafford, 1992
Advertisement:

(Not actually a Website, though accessible via some Websites...)

Before there were Message Boards, Wikis or the World Wide Web, before the Internet even existed in its present form,note which started around 1983, after the introduction of TCP/IP and DNS there was Usenet, one of the first distributed discussion systems around and the earliest form of social media. Until the rise of Web-based forums in the late 1990s and early 2000s, Usenet was the place to discuss things on the Internet, and quite a few tropes regarding message boards in general started here.

Usenet began in 1979, when programmers at Duke University realised that UNIX's uucp (UNIX to UNIX copy) program, which was already being used to transfer email between sites, could also be used to transfer broadcast messages between sites (the original idea was to enable "community calendar"-style announcements, hence "news") and allow for discussion areas, which they decided to call "newsgroups". Eventually, as access to the Internet became more common, uucp was replaced by the Network News Transfer Protocol, and in 1985, the system itself was reorganised into 7 branches (the "Big 7") in an event called the "Great Renaming". An 8th, humanities, was added later.

The current Big 8 are:

Outside the Big 8, but no less important:

Due to various legal and financial pressures (the former due to its use in copyright law violations; the latter because Usenet requires lots of bandwidth and storage space, more than its dwindling numbers of users can justify), Usenet has become less accessible over time. Many major internet providers have either limited access to Usenet, usually by refusing to carry alt.binaries, or have shut down their Usenet servers completely.note One of the major reasons for providers shutting off Usenet access was child pornography, which wasn't limited to alt.binaries: a couple of child sexual abuse recovery groups got flooded with it. To fill the gap, specialist Usenet providers have appeared, and many ISPs simply outsource Usenet access to them. Probably the easiest way to access Usenet is through Google Groups, as awkward and buggy as it often is.

Given Usenet's oft-predicted imminent death, it's perhaps ironic that one of the most active Usenet groups of the 2010s was alt.obituaries, where obituary writers and fans hang out.

When Usenet became available to the general public (not just universities) in 1993, an unmanagably large number of new and uneducated users were introduced not only to Usenet, but also to The Internet itself, resulting in Eternal September. In fact, this event would prove to be so significant to internet culture that it has even been listed

by The Other Wiki. The term Roguelike was also coined on Usenet as the newsgroup for the genre needed a name.

Usenet is the Trope Namer for: