Website / Channel Awesome
aka: That Guy With The Glasses 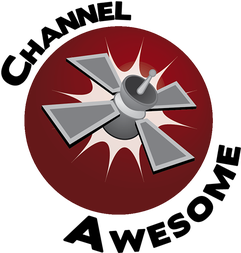 Channel Awesome, formerly known as That Guy With the Glasses, was the pop culture reviewing site network, featuring numerous critics, sketch comedians, and riffers since June 4, 2008. Occasionally and early on they did Anniversary Specials with the big names. It was divided into Blistered Thumbs, Inked Reality, Team TGWTG, and Barfiesta.

From November 2010 to January 2014, they operated a spinoff site Blistered Thumbs, which featured gaming-centric videos and articles; after that site closed, its contributors were moved to the main site. There were plans at one point to spin off Channel Awesome's comics and anime reviewers into a new site called Inked Reality as well, but those plans never went through. In addition a third video reviewing site named Barfiesta, which focused on Chicago nightlife and was run by Rob Walker and restaurant critic Laura Lopez, was operational for a few months in late 2009 before shutting down.

On December 2, 2014, Rob Walker announced on his Facebook page that thatguywiththeglasses.com

. (the URL now just redirects to the channel's YouTube page)

In late March and early April 2018, many former and then-current contributors came forward and compiled over seventy pages of grievances

regarding years of mismanagement, sexual harassment, and abuse by Channel Awesome's higher ups. Between the longstanding problems plaguing the company coming to light, a couple of badly handled responses (among them, "we sincerely regret you felt that way"

and the official one

) by management, and predatory behavior reports

about deceased former contributor Justin Carmical becoming public, all but two videomakers departed in the immediate aftermath, leading to the planned tenth anniversary movie being scrapped.

The channel also now has a Twitch channel,

spearheaded by Nostalgia Critic actress and former Top 5 contributor Heather Reusz. The schedule alternates every weekday between different contributors (mostly from Nostalgia Critic) streaming games casually and interacting with fans via chat, with a "Tournament Tuesday" every Tuesday pitting the contributors against each other in gameplay.

Please restrict examples from the following shows to their respective pages, unless they're from non-anniversary special crossover videos.

Alternative Title(s): That Guy With The Glasses