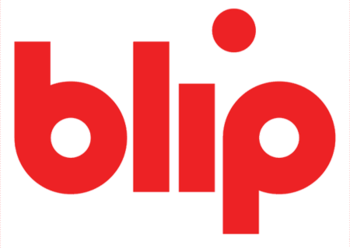 (2005–2015) was a content provider best known for hosting web series of various kinds, the most common of which, of course, being Video Review Shows. The site used to host videos for several notable content creators, many of which are extensively listed by this wiki, such as The Nostalgia Critic.
Advertisement:

However, once Blip TV was bought by Maker Studios on August 21, 2013 (which would be then bought by Disney on March 24, 2014), things quickly went downhill for the site. What followed then was at least two content creator purges based on how much money they were making for the site, one of which happened on November 7, 2013. These purges, however, would only go on to further damage the site's reputation and diminish its userbase, until finally, in 2015, it was announced that Blip would soon stop accepting new content. Blip.tv was then shut down by Maker Studios on August 20, 2015, which, in turn, made it so that several archives of the site were made, including, most notably, one by Archive Team.

The following web series were hosted on Blip TV:

It should be noted, however, that most of these folks were formerly hosted Revver before some notably nasty stuff happened with that provider

, causing a great migration over to Blip. However, other issues with Blip involving customer support and monetary issues caused some of these people to leave Blip for another provider, Springboard (among them are TGWTG's Obscurus Lupa — who would then returned to Blip — and Sad Panda), before the former actually shut down. This means that, although a great many series were hosted on Blip back when it was still around, not all that many of them were actually lost when it shut down. As for the ones that actually stayed on the sinking ship, however... well, as mentioned before, Archive Team

Also, as an interesting off note, at the time of its demise, Blip TV was blocked in China and Turkey.