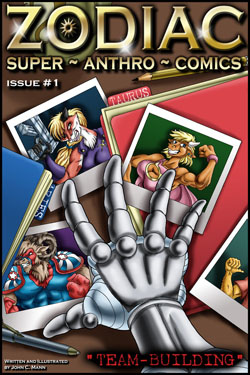 Zodiac is a superhero Furry Webcomic. Those who have "Extraordinary Powers and Abilities" are required to register with the government; these persons are then often hired by major corporations to protect their interests, with the caveat that they must also perform public service.

The New Dawn corporation is one such business, who are branching out into hiring supers for the first time. Lead by an enigmatic, probably insane board, Zodiac is a team still learning to work together, while many of the established heroes are finding that going public only has drawn their old enemies to them once more.