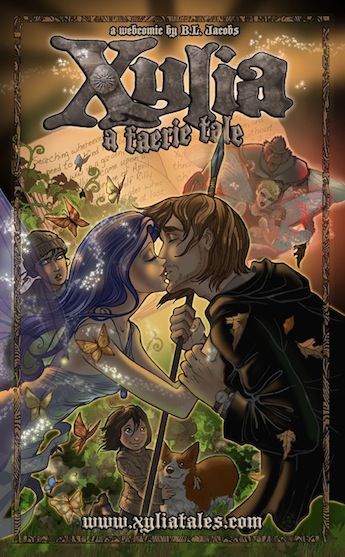 Livy: It's always how with you. Things are what they are.
Advertisement:

is the webcomic story of Charlie, a young British historian who discovers his strange connection to the faerie realm of Azlôe. Charlie is actually the most recent incarnation of Claudius, an Azlôean forced to live as an ordinary human without memory of any previous incarnations. With his discovery of Azlôe comes his discovery of Xylia, a beautiful faerie woman and his destined lover. The only problem? Azlôe has been taken over by the cruel Deimos, a troop of evil faeries is after Charlie's life, and Xylia's been missing for years.

Unfortunately, the story has been on hiatus since January 2010 due to the author's personal problems, and, while a blog update in June 2013 affirms her desire to finish the story, the aforementioned problems have left her unable to continue with the romantic basis of the story as it stands. Several attempts at a rewrite have already been made and abandoned.