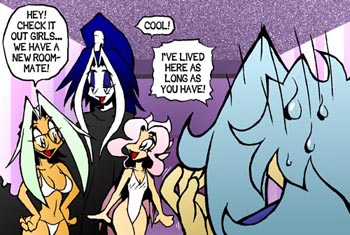 Left to right: Wendy, Lucy, Yumi and Miki
"Confusing everyone nonstop since 1999."
Advertisement:

A mostly silly and lighthearted comic that became just a little Darker and Edgier during its second act, Wendy followed the adventures of the title character, a bespectacled hedonistic bisexual named Wendy, her deceptively sweet gal pal Yumi, her cheery goth genius friend Lucy, and occasionally the reluctant fourth roommate Miki. At first glance this webcomic wouldn’t seem to have much of a plot and you’d generally be right, but as the comic progressed it began to develop one that became darker and more dramatic the more you went into it. Wendy was cancelled after the second part and was never really given a proper conclusion.

which itself is a predecessor to Jackie’s largest comic Girly. Wendy is a decidedly rare webcomic that could very well be the definition of Old Shame and Creator Backlash. It has been sporadically available on the internet for almost a decade, it has recently been reinstated. For those who really want to read it, we recommend that you start right here.