Webcomic / Wanderers Of The Mushroom Kingdom 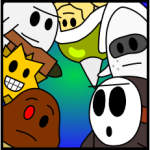 The titular Wanderers.
Brocius: You've been whining nonstop for three days now! Give it a rest already!!
Gyro: Hey, you've been complaining about my complaining. You're no better.
—The First Page

Wanderers of the Mushroom Kingdom

is a Mario fan-comic written and drawn by BeethroBudkin07, and started on January 27th, 2011. It features a group of characters trying to find their way home. However, their journey is put on halt when one of the team members is kidnapped, and the others rush to his rescue. The first ten or so pages are mostly comedic in nature, and while that aspect remains afterwards, the focus is mostly on the story in more recent updates.

The band of adventurers features Gyro, a Cyborg Goomba who complains and is easily scared; Adexab, a radioactive Spike Top who acts as the cool-headed leader; Brocius, the Deadpan Snarker Shy Guy who acts selfishly; Frank, the cheerful but childish golden Fuzzy; Sid, the nerdy Blooper; and Dervius, the Trigger Happy mercenary Boo with a Rocket Launcher.

and on the author's deviantArt gallery

Wanderers of the Mushroom Kingdom provides examples of: