Webcomic / Under the Aegis 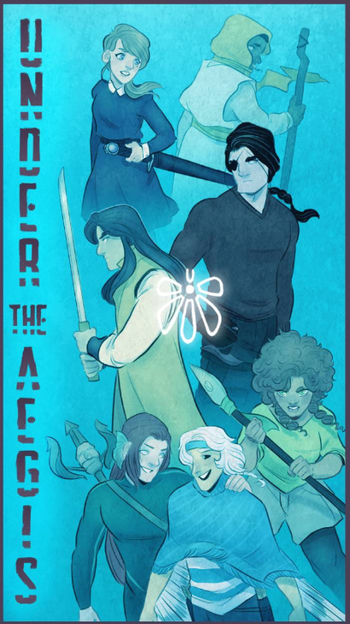 The Wieldersnote  Clockwise from the top left: Mattie, Shiloh, Dorian, Sienna, Gawain, Nen, Sam
Strength... Reason... Courage... Compassion... Kindness and trust... Under the aegis of the wielders we shall hopefully become more like them.
— Councilwoman Allura
Advertisement:

"This is a story about the struggle for peace and the search for something precious that has been lost for over a thousand years. Six young people, with the help of the ancient weapons that chose them, must work together to solve a millennial mystery before they too become lost."

Under the Aegis is a fantasy webcomic about a team of Chosen Ones from across the world coming together to navigate their new political responsibilities, relationships to one another, and mysterious threats to their lives. It can be read on Line Webtoon