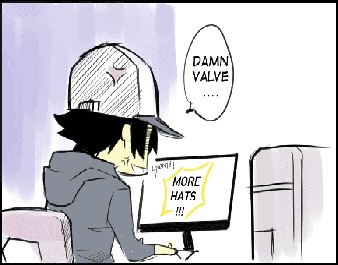 Because we need more hats.

2Gamerz is a part-videogame part-anime webcomic created by Gaein. Diverging from the Two Gamers on a Couch formula, 2Gamerz is more along the lines of a gaming webcomic that parodies videogames as well as anime and internet-related material. The comic typically follows a Gag Per Day format. The comic updates regularly on Friday and Sunday, but recently has been experiencing some Schedule Slip due to the creator having to deal with the comic and college.

Typically has good artwork that pays homage to manga as well as panels set up like manga panels and anime facial expressions for the characters.

Also has a side comic called Let the Games Begin which can be viewed here.