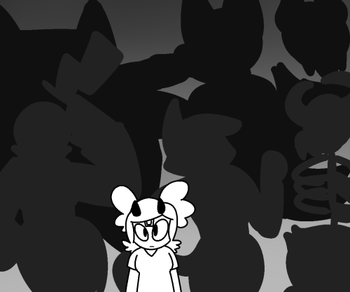 In an alternate universe, where time is frozen and chaos looms in the near future, a girl has found herself stranded with no memory of her arrival.

Meatgirl: Well, you know what we have to do now, right? We have to go save the princess!
Sally: PFFF-What, is this some shitty RPG game? You can’t just go and rescue a princess! What are we, the chosen ones?
Heinrich: Heehee, Sally’s right. You’re just a couple of teens, and I’m a middle aged train conductor. How’s it up to us to save the entire world?
Meatgirl: Well… Because everyone else in this godforsaken world is probably thinking the same thing about themselves. Nobody else thinks they’re good enough to save the world. We sure as hell aren’t good enough, yeah, but if we don’t save this world, who else will?
Heinrich: …WELL, look at that! Little miss Alternia has some leadership in her!

A human girl awakens in a strange facility called Toyland, very far removed from the planet Earth. This proves to be just the first of many shocking developments. She also now sports a strange set of horns growing out from her hair… a large bandage on her brow covers a bizarre new injury… she's unable to remember her name or any solid details about her past… and oh yes, there are Commentators in her brain guiding her actions. Naming herself "Meatgirl," the human sets about exploring Toyland, finding it to be one part testing site for mad science and one part headquarters for a sinister group called 'The Coalition.'

Meatgirl comes to learn many sinister facts about the Coalition. They have conducted cruel experiments on countless beings, and have injected massive amounts of a dangerous substance called "Corruption" into her body. The world outside Toyland's doors is doomed, but the Coalition refuses to save it, in the name of some unfathomable greater good. And they are so amazed by how splendidly Meatgirl's body tolerates Corruption, that they wish to induct her into their Coalition right away.

Except Meatgirl finds the Coalition to be so unbearably callous and oppressive, that she'd rather take her chances in the doomed world outside of Toyland. Amazingly, Meatgirl is allowed to leave Toyland peacefully, but is warned that if she tries to stop the Coalition, she will be sorry.

The world outside Toyland turns out to be an extraordinary one, populated by many strange races. But this world suffers from a dreadful plight: ever since the Clock Princess was kidnapped, years ago, time has stopped. The sun and moon don't move… nobody ages… and everything would be still as statues, if not for the Coalition's supernatural aid.

Meatgirl vows to find the Clock Princess and set things right for this world, and in doing so, maybe even find her way back home to Earth.

Transverse is an Interactive Comic authored by Yamemeda, which can be read here.