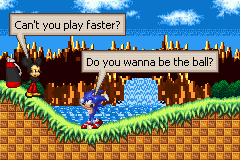 This is the one weakness of everyone's favorite hedgehog.

A comic by relatively new Troper Finalhazard Jones, Tonzura Koite is essentially what you would get if you took Kingdom Hearts, place the timeline and universe sometime in the Sonic the Hedgehog universe, and made it parody action RPGs. Some people have said that it's a great mix of these things. Others say it's a horrible thing that is a blasphemy of sprite comickry and should be burned in the bowels of Hades.

It's about a young hedgehog, Rodriguez Alexander Jones (nicknamed "Finalhazard") and his plucky anthropomorphic Pokemon sidekick, Edwardo Rocket, and how they cope with the recent occupation of his home planet of Sunset Mobium by The Heartless. Along the way they're companied by an albino ape with psychic powers named Specter, King Mickey Mouse (who now does nothing more than watch WWE television programming and play golf), and several other characters that include the cast of the original Sonic games.

Oh, and did I mention that Finalhazard's a Nobody with feelings?

The comic itself can be found and read here

, and a forum to find the updates and talk about it can be found here

. New pages are posted up every Wednesday (usually).

This comic provides a few examples of: