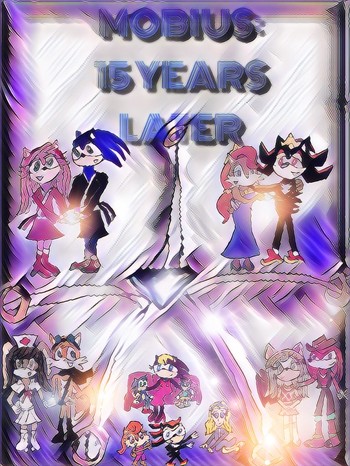 Tokyo, Mobius, and Mystic Ruins 15 years later is a Sonic the Hedgehog/Sonic the Hedgehog (Archie Comics) fancomic created by AliceLuvsMirai (formerly AliceAcorn6003), and spanned from March 27, 2017 to August 18, 2018.

It is AliceLuvsMirai's re-imagining of the Light Mobius arcs of Sonic Universe. 15 years later in AliceAcorn6003's universe, Sonic and Amy are now married and protectors of Tokyo, Japan (of the Sonic X world), and Tails and Cream, also married, also lives by them. Shadow rules as king of the kingdom of Mobius (of the Archie world) and protects it along with his wife and queen Sally Acorn. Over at Mystic Ruins, the Echidna Guardians, led by Knuckles and Princess Rouge, live their days guarding the Master Emerald. And they all now have children.

One day, after 5 years of bliss, Doctor Eggman suddenly shows up, after being presumed dead for a long while, and strikes his Evil Plan of taking over Mobius with Scourge and Lien-Da and eventually wiping off Sonic from existence with another Genesis Wave. The seemingly-retired heroes are now shocked by this new persuasion to rise up and defeat Eggman. While everyone else fears for the safety of their children, Amy and Sally worry about how their husbands will prevail.

A day before the webcomic's end, AliceAcorn6003, announced Kazoku Forever After, a Prequel Script Fic to the comic, taking place 5 years earlier and exploring the villains' previous plots. It began on August 21, 2018 and it still continuing.

Sonic and Amy, back then dating, are looking forward to moving to and living their peaceful lives in Tokyo, revealed to have been their birthplace. Eggman sees this as a threat to his plan of building his empire in Japan, and begins to stalk them. Meanwhile, Mobius has been attacked by the evil forces of Scourge and Rosy, abducting and imprisoning the Princess Sally Acorn. Shadow, then agent of Tokyo, frees her, and they together embark on the quest to save the kingdom.

The cover can be accessed here

to start the fanfic.

This comic/fanfic provides examples of: