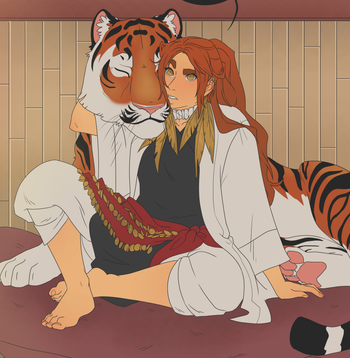 Hail to the Queen
"If your Emperor wants to speak to me so badly, why does he not come to the south himself? Is he afraid of—what is it he calls me? The "Tigress Queen"?"
— Kizarasunga, "Six-Feathers" of Zizumbir.
Advertisement:

The tribal nation of Zizumbir has been fending off settlers from the Jaezian Empire to their north for generations. Kizarasunga, the current warlord of the South, has been invited to meet directly with the Jaezian Emperor to finally put an end to the bloodshed. The catch to the Emperor's plan for peace is that it requires a marriage alliance that no one is exactly keen on.

is created by Allison Shaw, who also makes Far to the North. The comic updates Fridays and is an affiliate of Hiveworks.

The current version of Tigress Queen is a Continuity Reboot, as Shaw wasn't satisfied with the earlier one. The original version is still available here.