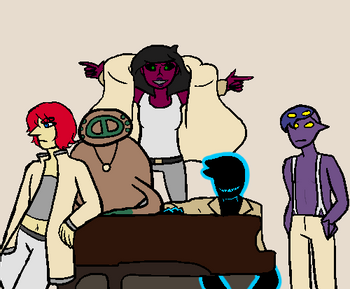 The Western Gang is a fantasy webcomic with no set schedule about a society of bizarre vagrant creatures living in a seemingly post-apocalyptic world. When Hayley Erythro is kicked out of the Western Gang, a prophecy predicts that Erythro will turn the world on its head. With Hayley on the loose, Nuria Spetura and Victor Cyanine, the leaders of the West and East respectively, must deal with their own internal struggles, all the while the mayor of the Southern City prepares to fight to keep their position of power. Can be found here

The comic has not updated since December 2017.