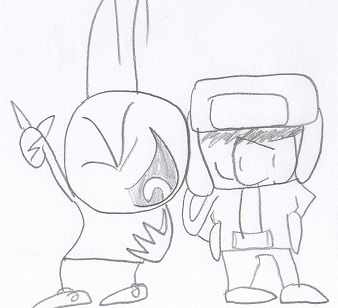 Best friends in a world of hatred and terror.
Advertisement:

THE UNHISTORIVERSE, A LAND OF WONDER....

Manty, a Trigloian Praying Mantis who lives in Minnesota around 2030 A.D, is very homeless. See, his owners abandoned him when they found out the evil Brainbots being developed up in Alaska have multiplied to dangerous proportions, and will take over the entire U.S in a matter of time. In his travels, Manty meets Jay, a old teenage guy who happens to be driving the the coolest golf cart in the universe. Jay, at first asking Manty for road directions, becomes friends with the insect, and they decide to travel to the Triglo Islands off Australia, where they'll at least get some peace. Or so they thought....

Turns out, the island they move to is "Biology's Dumping Grounds", much to the two's dismay: Hideous monsters and cuddly creatures inhabit the otherwise-peaceful island, the main means of transportation is by roller coaster, and the resident Big Bad resides on the island a few miles away. Thankfully, they have the powers of the Ultimateum Agates, a living house, and a loveable shadow blob to protect them.

That's just one of the stories told by the Unhistoriverse, a Verse created by Troper Commander Jay. The Unhistoriverse was caused by the K-T asteroid missing and an Eldritch Abomination hitting instead. This created legions of bizarre and fascinating creatures which walk the world with humans. Other works in this universe include Ultrasonic Megasonic, a pair of enemy robots who both want to kill each other (and both fail), Blockedd And Friends, the tales of a very unintentionally frightenting shapeshifting alien and his lint ball octopus friend who live on a planet behind Pluto, and Sanctuary C, the story of a steampunk robot and his crayfish looking for the titular sanctuary in a ruined Russia. You can find art relating to this verse here.