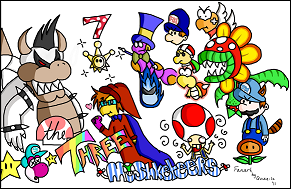 Who posts an ad looking to "save the day" in a newspaper?
Mason: Sorry, I don't speak nutcase. What exactly did you just say?
Mario: We need your help, Mason! At the moment, we're saving Princess Daisy in Sarasland, so we need you to save Princess Peach!
Mason: Interesting. What's in it for me?
Mario: We will...buy you a candy bar at Circle K or something.
Mason: YOU'VE GOT YOURSELF A DEAL!
— Issue 1
Advertisement:

The Three Mushketeers is an online webcomic

made by the user "Mason" of the Super Mario Wiki. It is a Sprite Comic featuring the adventures of Mason, a red Magikoopa, Solar Blaze, a sunglasses-donning Ember, and Gupdoo, a pink Yoshi. Later on, Gupdoo is replaced by Neptune, a white Bowser.

The three unlikely heroes must journey through the Macadamia Realm to find the seven Shine Sprites scattered across the land. Most of the comic's characters are users of the Super Mario Wiki itself. The comic is also plagued with puns and Shout Outs.

The comic is completed, with 150 issues and a sequel, titled Anton the Fifth Mushketeer.

The Three Mushketeers contains examples of:

Mason: Come on, sing with me! ''The sewers, the mighty sewers...

Thwomp: Me regret nothing.

Neptune: Gee, I hope Gamefreak doesn't give me some pie. That will, uh...surely "kill" me.
Gamefreak: Nice try.