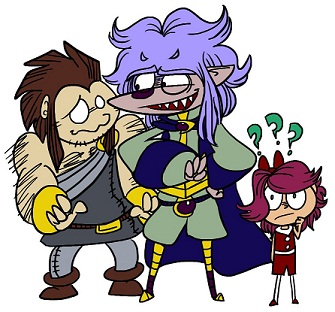 is a satirical fantasy webcomic by Courtney Svatek and Victor Acuña about “the odd and helpless situation of being a villain in an adventure game.” The comic features a trio of colorful characters—hapless evil overlord, Lord Tiberius Skärva the Fourth, his right-hand lackey Derk, and Lorelei, a girl who "obviously never had a mother who warned her to stay away from strange shark people"—and their adventures in a world that runs on classic adventure game tropes.