Webcomic / The Caretaker of the Ruins 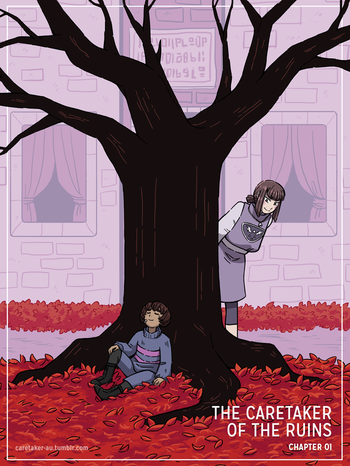 The Caretaker of the Ruins

is an Undertale AU comic created by Peppermintbee (a.k.a. Minty), Eruto, and Ellipsis. It centers around a grown-up Chara assisting fallen humans through the Ruins, in similar vein to the canon caretaker Toriel. It even starts off similar, with Chara meeting Frisk after the latter "falls down". However, the similarities are quick to end... and not in a good way.

The comic was confirmed

to be canceled on May 21. The creators plan to release a written plot summary that reveals what horrible tragedies would have befallen Frisk and Chara, as well as the thrilling conclusion to the story. Alongside the summary will be early concept art of scenes that could have been.