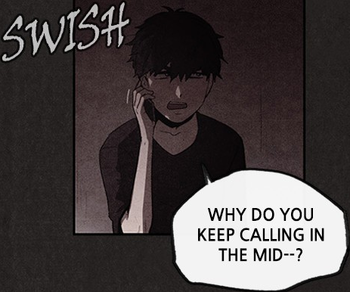 Ladies and Gentlemen, our hero
Advertisement:

Sweet Home (stylised as Home sweet home in the comic) is a horror Webcomic about Hyun Cha, a boy who recently moved after his entire family died, and was unlucky enough to have all this happen during the Apocalypse, an event where people are suddenly turning into monsters. But don't feel too sorry for him, as he's a bit of a Jerkass. note Fortunately, Character Development kicks in soon enough. He and several others take shelter inside an apartment building and try to survive. Eventually, a gang of criminals led by Joon Shin break into the apartment and causes trouble for the survivors.

This series has the same author as Bastard!!, something that helped it quickly gaining a good readership in a relatively short time.

The comic concluded on August 23rd, 2020 with a total of 139 chapters. A miniseries adaptation aired on Netflix in December 2020.

A prequel series Shotgun Boy was made on March 17, 2021, telling the story of another troubled youth and his efforts for survival.