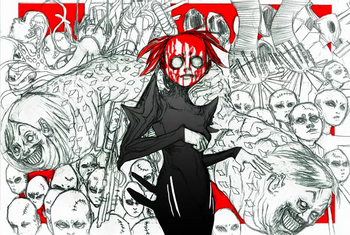 "You're here all alone."

is an ongoing comic written and illustrated by an artist known as Ashes that began in 2011.

The plot of this psychological horror follows a girl named Jackie who has the unique and often destructive ability to warp reality by thinking (or not thinking) about it. Her short attention span and complete lack of control of her powers can cause problems ranging from minor physical changes to cataclysmic events. Later we find that Jackie is not the only one who has been affected by what comes to be known as surreality, others have become vessels and are affected in different ways. These children of surreality attend school at Zoopy High. When Jackie shows up however, they all very quickly become affected by her surreality. Flashbacks from any character perspective are experienced by Jackie as well as the reader, and if she is not focused enough or just doesn’t care, then that memory gets erased. The school begins to bend to Jackie’s careless will and everything descends into torment and chaos. Any attempts to fix what she has destroyed only seem to push reality further from what it should be. She knows something is happening, but she doesn’t know what it is...