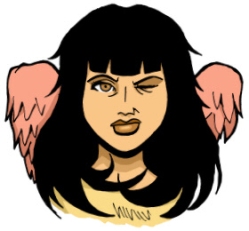 Subnormality is a webcomic with a whole lot of words created by Winston Rowntree. Created in 2007, this comic is a Deconstruction parade, where the author deconstructs everything from video game characters to tropes themselves, such as Cannot Spit It Out. Most of the events appear to take place in the city of Toronto, although other locales are used, such as Hell or some undefined time in the past. Some of his works are hilarious, some are depressing, and others are somewhere in the middle where you can't figure out what you're supposed to gain from it.

Reader responses are rather subjective; many enjoy it for the messages they receive from it, and others dislike it for how hard Winston tries to hammer in his morality. In this comic, you do just as much reading as you would if you were reading a book, it just has pictures to go with it. Somewhat of a Light Novel, except the art style is more reminiscent of western comic books than Japanese Manga.

Its strips are narrower (to fit the website's layout), generally shorter and rarely plot-driven. Many of them are humorous infographics. For convenience all page images taken from Abnormality link to this page. He also contributes to Cracked's After Hours series, providing illustrations for Michael's brain. Also on Cracked's Youtube channel is Winston's animated web-series People Watching, which deals in similar themes.

Subnormality can be found here