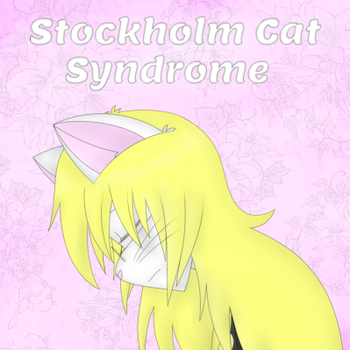 Stockholm Cat Syndrome is an ongoing furry horror webcomic created by Requiesticat. It started in 2015 and is hosted on deviantart

Stockholm Cat Syndrome (or SCS for short) follows the exploits of Zakona Kat, an aspiring artist who wants to be popular. However, her introverted nature prevents her from fully achieving this. She matures as she graduates high school and decides what she plans to do with her life, but when she is visited by a mysterious stranger one day, her life is thrown down an unexpected path. As a strange and frightening series of events occur, Zakona goes out of her way to investigate them- and gets into much more than she bargained for.

The comic's name was originally Solitaire, but has been since changed. In 2018, Srs released an official soundtrack, which is complete with variant album covers and character theme songs. To listen to it, go here.