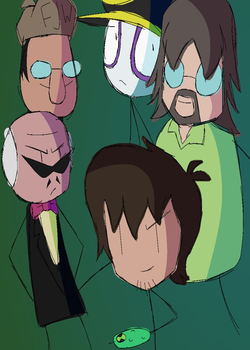 The gang's all here!
Advertisement:

Stick 10 is a Stick-Figure Comic created by Solo

based on the Ben 10 franchise. His best friend Ancy

helps out by writing the animated specials and voicing in them. started sometime in January 2013. The art style is fairly simple, with almost all characters having stick figure bodies with only heads (though some have bodies). It can be read here

The comic centers around Ben Tennyson, a 16-year-old boy with an alien watch called the Omnitrix, a device that allows him to transform into a plethora of different alien beings. The comic is a parody of the Ben 10 franchise, and such most of the characters come from the series. Some characters, however, are original, or from different TV shows and/or films, such as Shrek or Invader Zim.

The comic is currently still running in the form of its second iteration "Stick 10: Even More Swag".