Webcomic / Soil That Binds Us

"100 years ago, something SHITTY happened."
— The first page 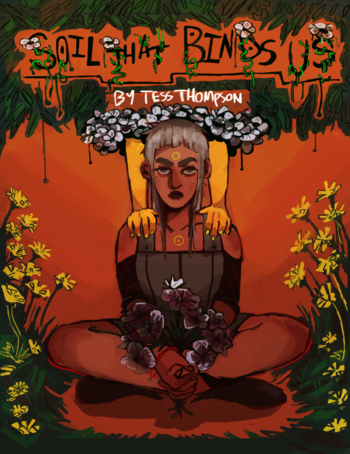 Guess what flowers those are.note Pictured: Petunia Null, part of Faye. Not shown: Dandelion Tuft
Soil That Binds Us is a paranormal fiction/fantasy webcomic written and illustrated by Tess Thompson. The first pages were released on May 30, 2017. The webcomic is currently ongoing, and has a steady update schedule of around four pages every Wednesday.
Advertisement:

The story takes place in a world where children, known as Mediums, can see and interact with ghosts. Unfortunately, these children are walking ghost magnets that bring danger and harm wherever they go. Paranormal facilities, often shortened to just parafacilities, were made to prevent Mediums from causing destruction by teaching them to control their powers. These parafacilities also are searching for a cure, which means they have to use Mediums as test subjects. Enter the protagonist Petunia Null, who is planning their 99th escape attempt with their best friend Dandelion Tuft. The two are caught and ordered to be seperated. The next morning, Dandelion wakes up the find a hole in the wall and Petunia missing. Dandelion manages to escape and the kidnapped Petunia wakes up in an abandoned parafacility, where they recognizes their childhood friend, a ghost named Faye. Faye promises to help Petunia escape, but only if they “bind”, a process that links two individuals by giving the ghost access to a physical body and the human access to elemental powers. Dandelion manages to get to the abandoned parafacility and meets up with the now-bound Petunia and Faye. The three escape together, now on the run from the parafacilities.

The webcomic can be read here

, and the official Tumblr here

Due to the consistent updating schedule, be aware of possible unmarked spoilers.

Soil That Binds Us contains examples of:

Some ASSHOLE ripped open the veil that stood behind life and death.