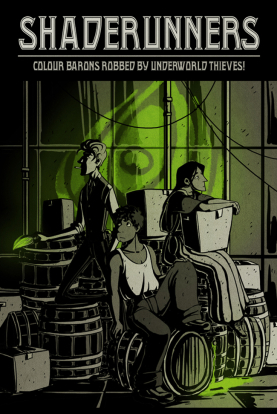 Ezra, Domigo, and Pamina.note Tragically not pictured: Ivo and Satinder. Less tragically not pictured: Easton.
Radioman: Is that the sweet scent of perfume liltin' through the air, or the harmonious tones burgeoning fellowship? Amongst thieves, who can say where tricks end and trust begins? Hold onto your hats, ladies and gents and those otherwise inclined, because the real test's gonna be Aces!
Advertisement:

Shaderunners is a historical fantasy webcomic written by Lin Darrow

and drawn by Alex Assan

. Set in a fictional city reminiscent of a big American city in the 1920s, it centers around a poor gang called the Shaderunners, who have the goal of making sure everyone is able to glimpse color in a black and white world.