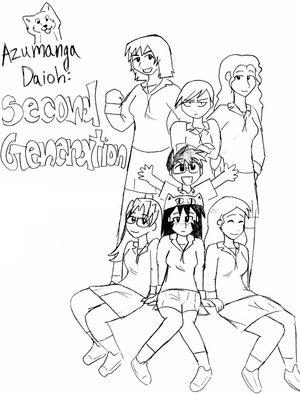 Second Generation began its first run around the summer of 2008 as a series of gag fancomics based on Azumanga Daioh, but it has since diverged into a more original world in its own right. Though some influences do still remain — like the place of Osaka and Kagura as teachers, and the mothers of Kaida (Sakaki and Kagura) and Koyomiko (Tomo and Yomi).

The comic follows Azumanga Daioh's slice-of-life style following a cast of quirky schoolgirls. But what sets this comic apart from its precursor is that it deals more personally with the characters and their everyday life, it's not just a gag comedy, it's also got romance and drama, just like what happens in high school.

There's Kaida, the shy girl who's in love with one of her friends; Koyomiko, her artistic best friend; and Koharu, the sporty tomboy. There's also Miyoko, the clumsiest and nicest girl in the school; and the comedic duo, Hannah, the bossy blonde, and Seiko, the laid-back gamer.

The series is mostly hand-drawn comics, with the occasional digital comic or traditional/digital art of the characters and it can be bit awkward at the beginning, but the story, art style, and general quality improve throughout.

The comics are found only on deviantART

, where the creator, Cartoony (aka cartoonlion) writes and draws the series.

You can begin reading the first season here.