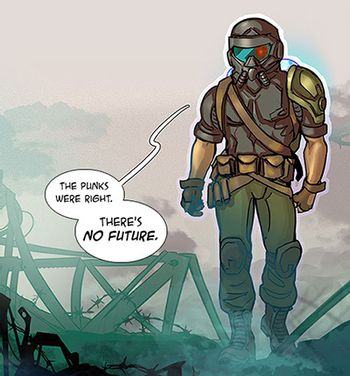 In the year 3007 a 'reality crash' has wiped everything out, and the last known survivor Axel Kepler is working his way backwards through time, trying to figure out where it all went wrong.
With a severely out of touch Database, a Transmutation Device for food (that, if anything, makes molecules less edible than they were before) and only a cryptic Blueprint left by his sister to guide him, he needs help…

He needs a Team.

Together, they will find out how to fix things, who the good guys really are… and why people from the future have such cheesy haircuts.
‘Meanwhile’, a few millennia earlier… a young boy named Magnus is bestowed with remarkable powers he was never meant to have, and chooses not to save the world with them.

RetroBlade was recently reviewed in this video