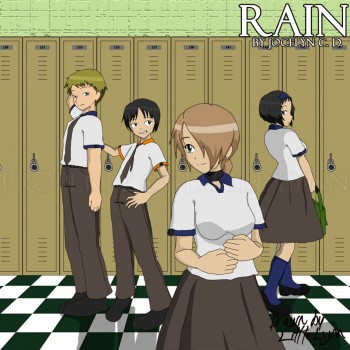 From left to right: Gavin, Rudy, Rain and Maria.
"A story for boys, girls, and everyone in-between..."
Advertisement:

In public, Rain appears to be your average teenage girl. She enjoys shopping and dressing pretty and whatnot, but the fact is that she’s hardly average. In truth, Rain is male-to-female transgender.

At age 13, circumstance lands Rain in the custody of her Aunt Fara, whom she finally revealed her secret to. Rather than see Rain suffer, her aunt decided to allow her to dress like a girl around the house if it would make her feel better. And it did… for a while, anyway. As time went by, Fara noticed Rain had become a bit of an antisocial hermit for the sake of being able to dress as herself frequently. Already shy to begin with, this probably wasn’t a step in the right direction.

Fara came up with an interesting (but ballsy) plan to remedy this, but keep Rain happy. It took a long time and a lot of work, but she saved up enough money to move the two of them to a new town where nobody would know them. They acquired a fully female wardrobe for Rain, and she was enrolled in a high school as a girl. It would be potentially dangerous for Rain if she were ever caught, but her nature made her seek perfection in her presentation before going out into the world... Well, her voice could use some work anyway...

Rain updates were posted on Mondays, Wednesdays, and Fridays until the final chapter ended on April 15 of 2022. It can be read on Comic Fury

, or on Jocelyn's DeviantART gallery

, and a Discord channel here

. Among comics hosted on the services it uses, it is very popular; it was one of the top 12 most popular comics on Smack Jeeves and the 2nd most popular comic on ComicFurynote the most if you only count active comics.

A web series was announced on Christmas 2020, but was went on a hiatus in 2021. You can still see the teaser here