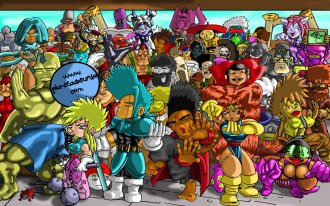 "This planet is a kind of Earth's distortion. What we would get if Earth was reflected in a mirror. A mirror we would first get drunk and then beaten. Its inhabitants call it "Earth", we will call it the Absurd planet."
— "Introduction to Planeta Absurdo"

is a Spanish webcomic created by Sr Mejillón (also known as Mull). Its several stories take place in an alternate Earth that combines hi-tech and epic fantasy. A place where heroes from comic-books and those from fantasy tales team up in order to defeat evil forces. A planet where Hilarity Ensues every minute.

Some of the heroes in Absurdo are Queen Numismática, a goddess from another world exiled in Absurdo; Jystmo le Bobo, a clueless lemon-eating paladin; Rayamanta, a raging princess and wizard; the Great Flowder, a very dumb yet powerful hero; Jolie and Ajezno, Flowder's sidekicks and brains; Talerdo Limalimón, a thief with a directional sense similar to Ryoga Hibiki's; Kurochán, a female assassin with a killing curse followed by a ghost girl; and so on.

Up to date, the main stories are the following: