Webcomic / Painter of the Night 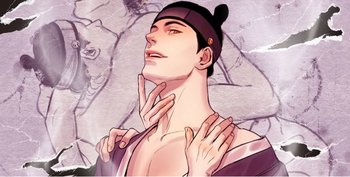 "And that is all I want" "You said you painted such images 'to survive', did you not?"

Painter of the night (레진 야화첩) is a historical BL Webtoon that was released in June 2019, written and illustrated by Byeonduck. It's currently hosted on Lezhin Comics in English