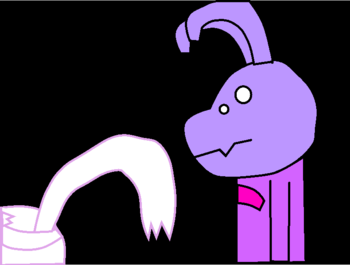 She's just talking to her sprite. Nothing to see here.
ok
Bamba
Advertisement:

Padak is a webcomic made in MSPFA by SniperInteleon. Four myrmidons play a game and risk their life doing so. There are also some other characters such as the sprites and Lil' Bal. There are also more classes and aspects, according to the creator. Did we mention the tengus? The webcomic is only in Act 2 Section 1. Additions are still currently being made.

Not to be confused with Padak the animated movie, which has a much different premise. It's also a lot darker, but Padak the Webcomic can get dark as well. SniperInteleon obviously knows the difference, since she apparently named it after the animated movie.

hey, bamba? sorry to tell you this, but there are more tropes on your porch!